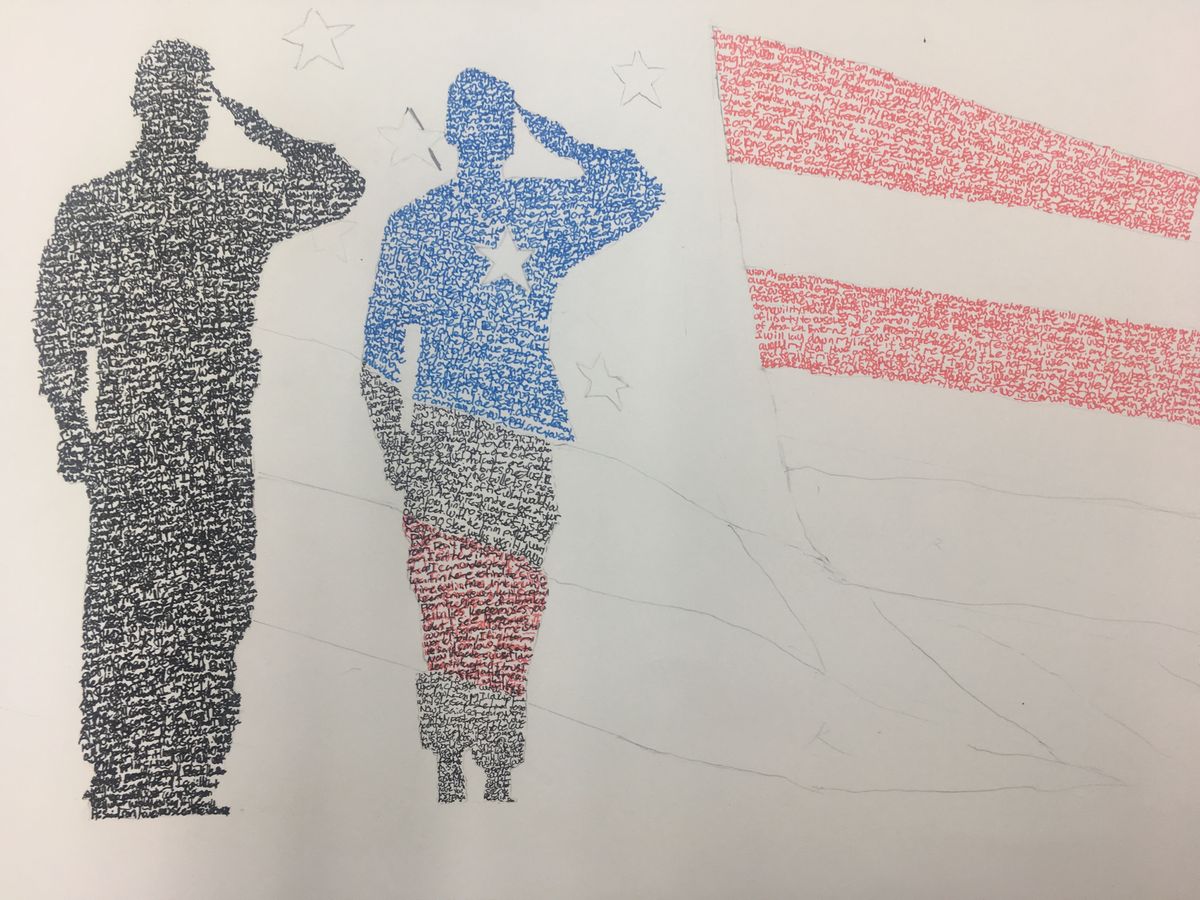 My Middle School students entered the arts classroom recently and were met with the following prompts: How would you define the term Veteran? Why do we honor Veterans? And, do you have any personal connections to a Veteran?

At first, the topic of discussion seemed unconventional, even out of place in the art room. A few students commented, "Are we in art class or American Government?" The students quickly opened up and willingly shared stories about relatives and family friends who were members of the military. Hooking them further, the next question lit up the screen, "Pictures are worth a thousand words, but what if those words were used to create a picture?" The students were introduced to an old art technique known as "calligrams"—images composed of written words that relate to the image being created. Quickly, the students realized their project challenge would be to honor a past or current Veteran by creating a calligram. They researched the national archives and current Veteran stories in search of an image or story that captivated their interests. My initial idea was to have students focus on portrait drawing but, to my delight, the students each interpreted the project challenge in different ways. One piece honors a young man who kept track of time by writing the months of the year on his helmet. Another shows a WWII Veteran in action, climbing a rope that was attached to a blimp after having completed a mission. Others presented Veteran mechanics working on planes and another displayed a soldier guarding a fleet of planes. One emphasized the brutal reality of the effects of war, displaying a three word sentence, "War is Hell."

Another student recalled reading a book about a Vietnamese family during the war and decided to focus on the Vietnam War Memorial in Washington, D.C. designed by the artist, Maya Lin. This piece honors both the artist of the Vietnam Memorial, and the names of the soldiers on the wall. At first glance, the artwork appears to be a portrait of Maya Lin, but there is an artistic twist, Lin's shadow reflected on the Vietnam wall, depicts a soldier. The students will complete the lesson with a discussion question: "If pictures are worth a thousand words, how much is a soldier's sacrifice worth to you?"

These will be finished and displayed at our Veteran's Day Assembly this coming November. View a gallery of calligrams here.