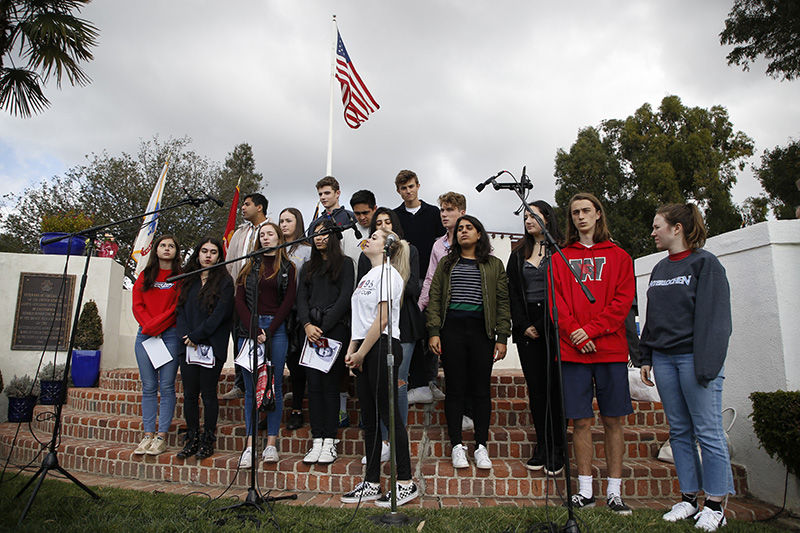 Brentwood School's 8th Grade participated in the 26th annual Abraham Lincoln Remembrance Day, held on Monday at the Los Angeles National Cemetery in Westwood. The ceremony featured a variety of songs provided by American veterans as well as by Brentwood's senior choir ensemble, The Madrigals, who performed stirring renditions of John Lennon's "Imagine" and "Who Lives, Who Dies, Who Tells Your Story" from the musical Hamilton. The ceremony's climax was a recitation by actor Kevin Dobson of Lincoln's Gettysburg Address. With the now well-known phrase "Four score and seven years ago," Lincoln reminded his audience, as well as Monday's assembled crowd, of the Founding Fathers' vision, which established a nation that was "dedicated to the proposition that all men are created equal." After the program, the 8th graders enjoyed a picnic lunch and birthday cake to celebrate the 209th anniversary of the birth of the 16th President.

James Hughes, Upper School Service Learning Director, had this to say about the experience of the 11th Grade students from Mr. Koransky and Ms. McKellar's US History classes, who also attended the event:

"Vietnam Veteran and Chaplain Dov Cohen, who organized the event and gave the opening invocation, commented on how wonderful it was to have Brentwood students both attend and contribute to the program in honor of Lincoln, and he expressed his hope that the students would return for future civic engagement programming at the VA in the future."