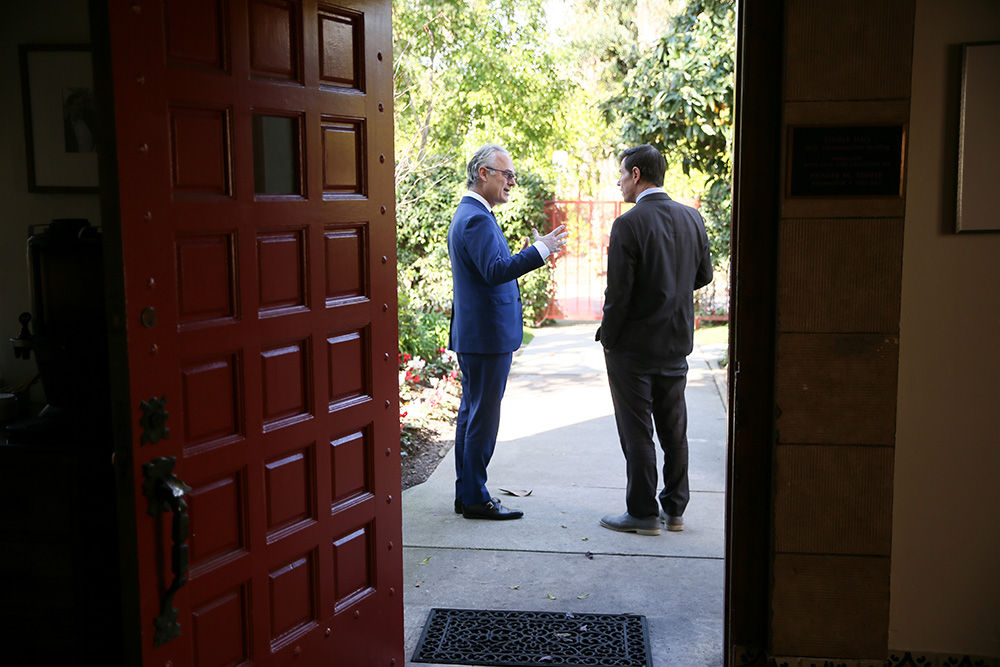 Since our March 10 Hutson Lecture Series featuring Amor Towles, I've been thinking about the writing process. Both Amor and our previous speaker, Erik Larson, generously shared their thoughts on their work—Amor as an author of historical fiction and Erik as a journalist and author of non-fiction—as well as the craft of writing, and, for the purpose of this letter, their different approaches to their art.

For example, Larson is a dedicated investigator who spends years on the research of both his subject and the time period. This gives him a better feel and accuracy for the subject. On the other hand, Towles intentionally does a minimum amount of research as he believes it gets in the way of getting to know his characters. That is, for him, too much allegiance to history blocks the emerging story and character development.

These differences in approach to writing struck home for me. In fact, as you look at different authors' approaches to their craft, you easily identify many more of these differences.

Erik Larson practices his craft through regular posts to Twitter, with one significant caveat. He disciplines himself to only write in full sentences and with correct punctuation. This approach requires him to be concise and direct in what he writes. A different approach to this practice is John Grisham, who emphasizes the importance of writing at least one full page each day—and he further requires himself to do this in the same space and at the same time of day.

Towles is a huge proponent of the detailed outline, and spends upwards of a year writing a 40- 50 page outline for each of his books. In the final outline, everything is laid out. Stephen King believes you have to follow the book: "You have to go where the book leads you...It's a big and powerful machine." Therefore, there is not much room for anything resembling a detailed outline.

Anne Lamott stresses the importance of writing at least three drafts. The first, is the terrible draft—just to get something on paper. The second, is the "up" draft—the one you fix up. And the third is the dental draft—when you meticulously check every tooth.

Grisham believes that if he can't make an understandable pitch in less than 30 seconds then it is not a book, so he won't even begin writing until he has his elevator speech. For example, here's his pitch for The Firm: "Young lawyer fresh out of law school gets a dream job that turns out to be a nightmare."

During his Hutson Lecture talk, Larson discussed the mystical aspect of writing, when something just comes to you. Sure, you work like crazy for it, but ultimately where the idea or character comes from is, to Larson, mystical. Neil Gamain relies more on pressure and idle time: "For me, inspiration comes from a bunch of places: desperation, deadlines...A lot of times, ideas will turn up while you're doing something else...Essentially, ideas come from daydreaming."

Yiyun Li requires herself to become rude with her characters. She believes it is the only way to get to know them. "You have to stare at your characters, like you would a stranger on the train, but for much longer than is comfortable for both of you. This way, you get to know characters layer by layer, until any dishonesty is stripped away. I believe all characters try to trick us." She is also a proponent of eavesdropping on conversations whenever possible—in airports, restaurants, parks, and anywhere people are congregated and in conversation. From these snippets, she creates a story that encompasses all that she heard. She does this both as an exercise and in search of new and interesting material.

All of the above is a reminder for me of two different thoughts. The first is there are always multiple paths to success, and the challenge is finding the one that best fits the individual. And second is that, regardless of your approach to writing, you need to write a lot (at the very least) if you ever want to be a great writer!

Have a great weekend, and I hope you make the time for an enjoyable read.