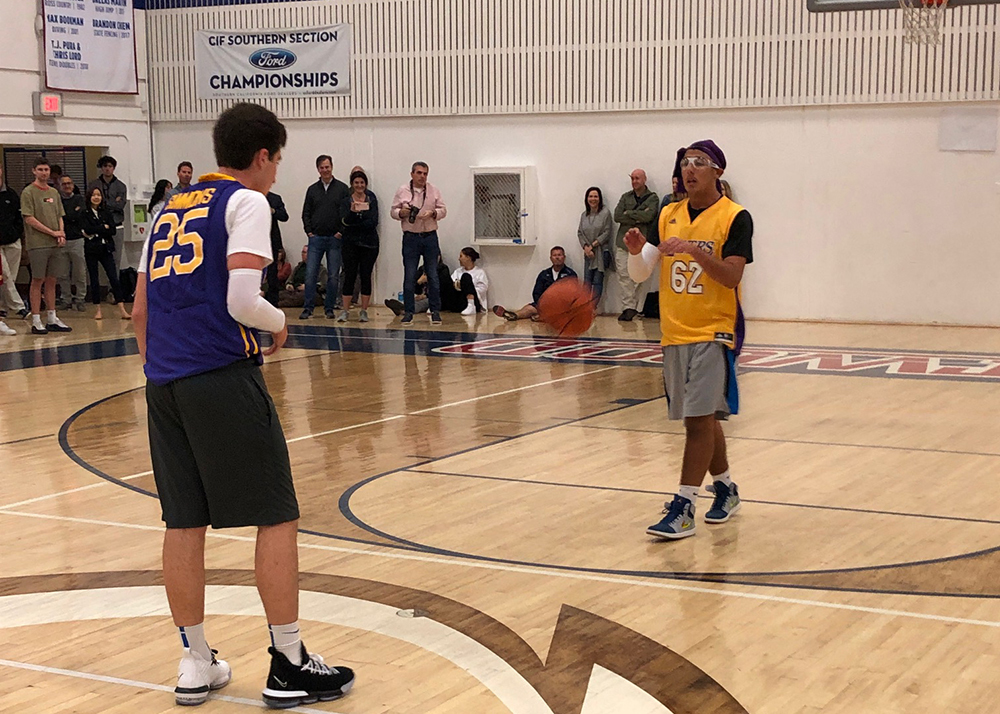 Five years ago, on the 8th Grade B basketball team, two players, Sammy V. and Ben S.—who did not get much playing time—challenged one another to a game of 1 on 1. They titled their challenge, The Best of the Worst. While both are quite successful athletes in other sports, they have kept up their annual Best of the Worst challenge game over the years. Considering that it only takes 2-3 years for something to become a tradition in a school, at 5 years, this tradition is well established.

Tuesday's Community Time in the Upper School featured this year's game live, even on streaming video. The gym was packed. Now seniors, each player had hand-picked several student coaches who all dressed the part and shouted out instructions and encouragement throughout. Sammy V. wore Laker gold and Ben S. LSU purple and gold. The starting "line-ups" were announced with the requisite music and idiosyncratic fist bumping, high-fiving, and much more. Another senior, Griffin W., belted out the national anthem and, to the delight of the audience, held back nothing. The crowd was pumped even before the first shot was taken.

The game was fantastic. I will not give you a play-by-play, other than to say both gave it their all. Though, to be truthful, at no point did Coach Bailey berate himself for losing them to other sports. The crowd, well, let's just say they were as animated as I have ever seen, with lots of shouting for fan favorites. In fact, at one point, hearing all the noise, a mass of Middle School students crammed into the gym to get a glimpse of the final few plays. And true to form, the game ended on a rather remarkable 3-pointer, which prompted the crowd to rush the court and congratulate (mob) the winner.

Later that night, we had a very different crowd up in the Student Life Center for our second Brentwood Fund Thankathon of the year. This is a night when parent/guardian volunteers call all of our families who have given to the annual fund since the November event. It began with a delicious banquet of food and a range of refreshments. While definitely not as loud as the basketball game, the spirit was just the same palpable feeling of community--celebratory, joyful, light-hearted, and connected.

In the past, you have heard me refer to the "100 Days of May" in terms of how much happens during this month—we pack at least 100 days worth of events all into this one month. That is still true, probably more than ever. Just as true, however, are all the wonderful and inspiring moments that occur during this month. Keep your eyes open, and I am sure you will spot many of them, because, along with the 100 Days of May, come the attendant 100 Joys of May.